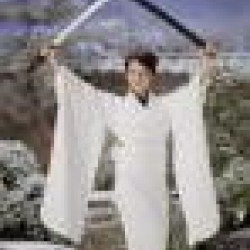 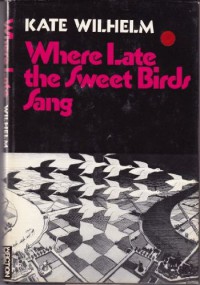 Post-apocalyptic, told in three parts, each separated by an unstated amount of time and involving a change of narrator, with some amount of rebuilding in evidence after they blew it up, those maniacs, but with the rebuilders ultimately consumed anyway, with some small survival thereafter. That level of generality makes it sound like [b:A Canticle for Leibowitz|164154|A Canticle for Leibowitz|Walter M. Miller Jr.|http://d202m5krfqbpi5.cloudfront.net/books/1329408540s/164154.jpg|250975]. It does not appear to be derivative of Miller, though; Wilhelm hints at nuclear war through the presence of lethal radioactivity, but the descent into apocalypse is gradual enough to be predictable, with pollution, disease, famine &c. taking a toll until civilization eats itself and then shits itself out (kinda like how [b:The Hunger Games|2767052|The Hunger Games (The Hunger Games #1)|Suzanne Collins|http://d202m5krfqbpi5.cloudfront.net/books/1358275334s/2767052.jpg|2792775] suggests that the end will come).

My main complaint about the dystopian subgenre has been that the setting is typically well done, but that the story usually is dreadful: some variation on individual v. the state, with the individual typically partaking in some greater or lesser degree of defeat (Winston Smith loves Big Brother; the Savage dies; Logan goes into exile).

Similarly, I now realize that the flaw with the post-apocalyptic subgenre is that the opening premise (end of the world) allows all setting rules to be erased, and a generalized Peril can be imposed on the narrative: every bush is vile; every breeze is dire. So, setting is not really ever developed in these items. Story, also, is just as badly developed as story in dystopia: instead of individual v. state, it's survivors v. environment, with survivors usually partaking in some greater or lesser degree of defeat by the end (they blow up the world again in Miller; the monkeys win eventually in Boulle; the road never ends in McCarthy).

So, the basic rule--

Any writer thinking of writing a post-apocalypse should therefore immediately revise and resubmit it as a dystopia.

None of that will stop these types of books from being written, as both appeal to certain strands of default teabaggerism in most bourgeois readers. For the dystopia, it satisfies the 'bagger sense that big gubmint is evil. For the post-apocalypse, it flatters the troglodyte impression that underlying civilization are neo-hobbesian economics 101 assumptions about survivalism, return to the state of nature, and philistine survival-of-the-fittest eugenics crap. There's a reason that people have described post-apocalyptic stories as basically fascistic, after all.

All that said, Wilhelm has written a decent enough novel, and it's classic enough to avoid my complaints, above, with which recent writers might get hit with full force and effect. Quick & fun overall, even if the science is a bit dodgy and the premises may have been superseded by historical events. Main characters are mostly snotty doctors who indulge themselves in cloning and breeding experiments, resulting in borg-like hive-minds. The novel's third section partakes of the dystopian subgenre most strongly to the extent that the narrator is a non-hive-mind "individual" who must fly free &c &c &c.